Adrian Wootton OBE, now the Chief Executive of Film London, was Broadway’s first Director from 1989-1993. He takes a look back at our early days and the Shots in The Dark festival he founded in 1991...

When did you first join Broadway Cinema?

I was appointed in the autumn of ’89 and started properly in 1990. This was the very beginning of Broadway as you know it now. I acquired three staff; two front of house managers and a projectionist. My job was to fundraise to change the building and to redevelop the whole organisation.

"Chariots of Fire producer David Puttnam came along to urge people to donate. Unfortunately we spelled his name wrong in the programme (‘David Puttman')"

There was the Rainbow Rooms, which is where the café bar and Screen 2 are now, and there was a big sprung dancefloor where they used to serve tea and host dances. It was all very 1950s. The rest of the building was office space. The Nottingham Co-operative Society was still based there and wouldn’t move out of it until we confirmed redevelopment, which we needed to raise a lot of money to do. 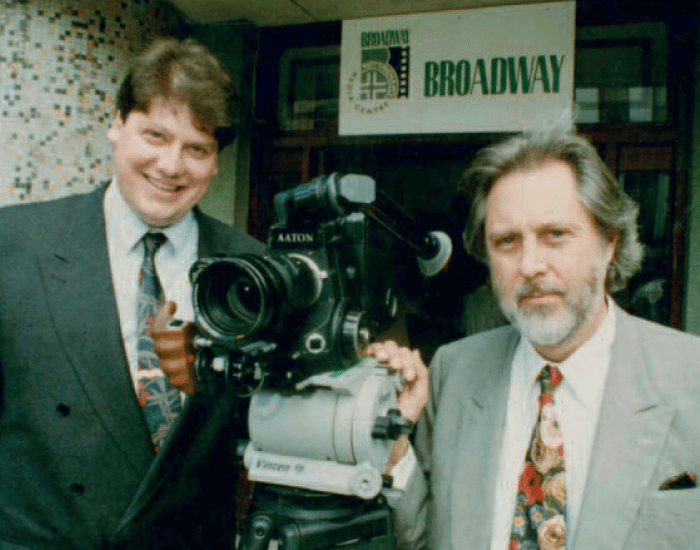 How did you find that money?

The British Film Institute were the main funder, but they gave me one year to get more. I decided that we needed to raise our profile to raise additional revenue, so we decided to re-open the cinema even before it had been rebranded as Broadway. Nottingham scriptwriter, Michael Eaton had written a film called Fellow Traveller, which was a big hit in Edinburgh. So the first public event we did was to show that film with Michael on stage discussing it.

"I went to the Odeon, and they said they had this film that might work called Silence of the Lambs. So they gave us the British Premiere"

Where did you eventually find the money from?

We held a private event for potential investors and Chariots of Fire producer David Puttnam came along to urge people to donate. Unfortunately we spelled his name wrong in the programme (‘David Puttman’), so there were lots of people sticking on correction stickers the night before. It was a slow burner, but after that we got the money from various sources including the European Regional Development Fund, and Diamond Cable who sponsored one of our screens.

The main thing I remember is it was all very much by the skin of our teeth. People were running round with drills hammers and nails literally minutes before we opened for the first time.

Tell us about Shots in the Dark and the history surrounding that festival.

We knew we needed to do a festival, even the City Council were asking us to run one, and I had a particular passion for the crime and thriller genre. Then we had a piece of miraculous luck. I went to the Odeon, and they said they had this film that might work called Silence of the Lambs. So they gave us the British Premiere. In a way, it was good and bad. We got national headlines for it, but it overshadowed everything else in the festival that year.

That was also the year we had the French filmmaker, Claude Miller over. We also had writer/ director Sam Fuller, who was smoking these enormous cigars and telling everyone about hanging out with Al Capone for two and a half hours. Things like that were really magical. Those experiences have helped create Broadway’s identity as a cinema.

The next year Quentin Tarantino came over.

"I think it was the passion and enthusiasm we demonstrated which won us over with filmmakers and writers."

How did you meet QT?

I was scouring the “Variety” reviews and tracked this tiny little independent film called Reservoir Dogs. I was desperate to meet the director and so I went to see it at Cannes. Afterwards I introduced myself to Quentin and gave him my card. I told him it would be great to have him come to England and screen his film with us, and he agreed. Right after that festival, he started to write Pulp Fiction.

I went to LA again and saw him editing it, and hung out with him. Then it went to Cannes and I told him I wanted him back at Shots in the Dark with it. We agreed to do it as a surprise film, which worked for everyone as we got a full house and other people didn’t feel like they’d been usurped even though we were the first place in the UK that showed it. He brought the film reel from Cannes over on the plane with him with the French subtitles on it and everything.

What do you think it was about Broadway that enabled you to attract such talent?

I think it was the passion and enthusiasm we demonstrated which won us over with filmmakers and writers. They knew we hadn’t got enough money to bring them over and do things with them, but they didn’t mind because we created a welcoming environment. They knew we really cared about them and about their work and deliver the right audience. Everyone hung out. There were no VIP areas in our venue and everyone sat in the bar afterwards together. That lack of barrier really made Broadway a really important venue.

What does Broadway mean to you?

Broadway is incredibly important to me. It is one of the things I am most proud of in my career. The fact that it is still going 30 years later, is fantastic and is a testament to all the people involved.